Established in 1992, in Antalya, Turkey Software, Automation, Networking (S.A.N) has thrived both in spite of and because of the tremendous changes in the travel industry. The company’s keys to success have been twofold. First, driving technology innovation to commercial and retail travel agents.

“Using RAD Studio, we can write once and compile to two different platforms at once. It’s simple and it’s fast.”

General Manager of S.A.N, Erol Türk has cracked the code here. “Our customers are pretty clear about what they want—everything, now, and running everywhere. The beauty of it is we are giving them just that!”

Türk points out that that with roots in the travel industry rather than software development they understand better than most what customers want. Says Türk, “Our motto is ‘software made by tourism professionals’”. Given this, they need tools that are powerful, simple to use and flexible enough to deliver exactly what Tourism professionals seek.

S.A.N is experiencing enviable growing pains. Progress has been spectacular; their products are used by over 500 Commercial and Retail Travel agencies in over 50 countries. With offices in İstanbul, Cairo, Moscow, and Malta, S.A.N now has plans to open additional offices in Russia, as well as new offices in Thailand and Dubai.

With such growth comes technical challenges that have proven the downfall of competitors. Increasing complexity and constant change in the travel industry create huge technology requirements.

Travel industry professionals demand an ever-increasing list of features, available on multiple platforms, in multiple languages, and with rock solid reliability. They expect frequent functional upgrades with no alteration of their databases or additional training.

Travel product suppliers—airlines, hotel chains, cruise lines, etc. constantly change API’s. “We are developers who come from the travel industry. With that background and the right development tools we can stay one step ahead of our customer’s needs,” said Türk.

S.A.N’s latest challenge was the extension of their flagship product, TourVisio to mobile platforms. TourVisio is now available to hundreds of Travel Agents. With it they are able to support functionality that includes currency conversion, empty seats, reservation tracking and the exchange of information between branch offices. However, Travel Agency executives wanted round the clock access to real-time sales, capacity and other business metrics. Mobile extensions were the answer and became the most requested product from customers. “We knew we had to get it right,” said Türk. “Failure here would break customer trust, quickly driving them to our competitors.

Given the cross-platform requirements, Türk desperately wanted to avoid using Objective C. He estimated that approaching the project with Objective C would have taken at least two to three months and several developers to complete. “It was clear there were no Win32 packages that would meet our mobile requirements. We faced hiring more developers and retaining them for ongoing support. As long-time users of Embarcadero solutions, including Delphi, the choice was easy. “Embarcadero develops robust development solutions and has a strong reputation with us for good development environments and good components. We trust them.“ The flexible structure of RAD Studio solved our problems,” said Türk.

just one developer they used RAD Studio over a 2-week period to finish the entire TourVisio mobile project. “Using RAD Studio was a mobile development dream. We were blown away by how fast and trouble-free this project went.” Türk added. They created and tested the initial mobile version in iOS and with RAD Studio they were able to port it to Android without changing the code.

“Embarcadero develops robust development solutions and has a strong reputation with us for powerful development environments and good components. We trust them.”

“Using RAD Studio, we can write once and compile to two different platforms at once. It’s simple and it’s fast. If you want to deploy it on Android, you just select the Android platform in RAD Studio and compile it to Android. It was like pushing a single button,” said Türk. Because RAD Studio simplified the application development, S.A.N delivered the TourVisio mobile application to market in record time. The mobile application provides a range of management reports, including daily sales reports, periodic sales statistics, reservation monitoring reports, flight monitoring reports, and reports on seat inventory.

The new TourVisio mobile reporting application gave the executives what they wanted and customers were happy. However, something unexpected happened. “We found that executive management of the tour operators loved accessing the real-time reporting features on their iPads so much it changed their business practices,” said Türk.

Becoming avid users, executives could see important business metrics like daily sales and occupancy rates anytime and any place. This seamless and convenient access to information brought travel executives closer to their business. Says Türk, “Our customers became even more aware of the power of our products. They want more features than we possibly imagined. But we are ready.” 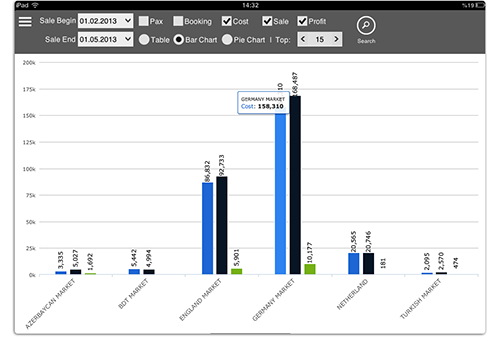 “If you want to deploy it on Android you just select the Android platform in RAD Studio and compile it to Android, it’s just a click of a mouse!”